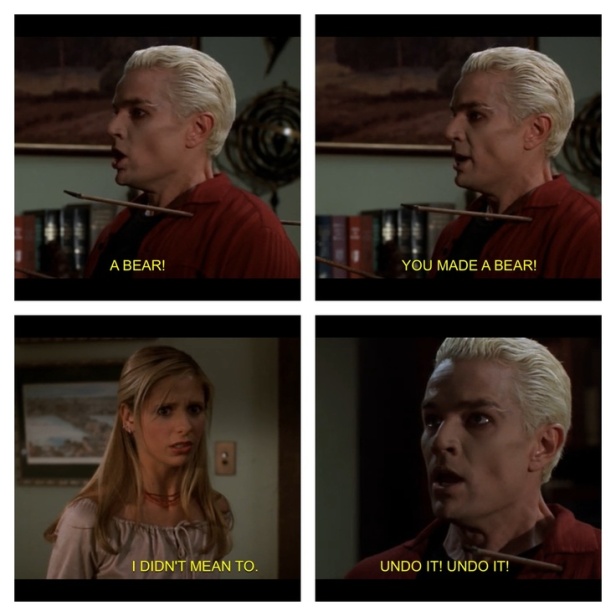 This is a quote from a Buffy episode I love titled “Pangs”.  Along with exploring the nuanced, culturally insensitivity and overall ignorance of the history and traditions of Thanksgiving (the version I learned in elementary school hailed Christopher Columbus  a hero and the Native Americans were generalized as scalpers) it is also just incredibly hilarious.  Buffy is challenging a Native pissed-off spirit that’s attempting to kill them to even the scales from their sacred ground being destroyed.  It is a shape-shifter of sorts and it transforms into a giant bear after she nicks his arm with his own knife.  Immediately Spike screams “a bear, you made a bear” to which she replies “I didn’t mean to” and he continues on with “Undo it!  Undo it!

So, this brief tangential recap of a scene actually connects to my day.  Garnett is the bear that I unwittingly created in this scenario. I was in the bathroom downstairs this morning and she had let herself in and shut us both in.  This bathroom is relatively small so she was pacing back and forth with her hands clasped behind her.  I looked at her and said, “what are you doing?”  She looks back at me and says with dead-ass precision “pacing.”  Now, I know I just stated that she was pacing, but this is not a word I have ever said to her.  Undoubtedly, Doc McStuffins taught her, but all I could think was….how many more advanced concepts and new vocabulary words is this kid going to come up with.  The answer apparently is all of them.  I can’t keep track anymore.  I used to know each new word she said and where she learned it.  Everyday she looks at Hubband and/or I and says something that it seems impossible for her to understand now at age 3.  Especially at 3 and like 2 weeks.  What in the actual hell?

I sometimes worry she is going to over-take us all.